In a place where images of horses appear on everything from T-shirts to public artwork, the prospect of the first Triple Crown winner in two generations racing at Saratoga Race Course this summer has the locals in an American Pharoah frame of mind. 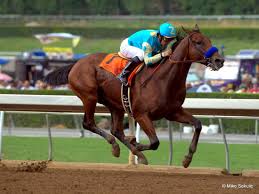 “I was in two coffee shops this morning and I couldn’t get through them without people saying, ‘Do you think there’s any chance?”’ Todd Shimkus, president of the Saratoga County Chamber of Commerce, said Tuesday. “This horse is a rock star.”
The nation’s oldest thoroughbred racetrack has history on its side, but fans here and elsewhere in the racing world shouldn’t bet the house on the first Triple Crown winner in 37 years racing at Saratoga.
For American Pharoah’s next race, trainer Bob Baffert and owner Ahmed Zayat may skip a trip to the Adirondack foothills in favor of the Jersey Shore, home to Monmouth Park, or they could return the Kentucky Derby, Preakness and Belmont winner to Southern California, where Baffert is based.
Saratoga has at least one possible option, and maybe two for the horse’s handlers: the Aug. 1 Jim Dandy Stakes and the Travers Stakes, run on Aug. 29. The $1.25 million Travers is Saratoga’s biggest race, with a history dating back to 1864, the track’s inaugural season.
Named after one of the track’s founders, the race, nicknamed the Midsummer Derby, traditionally attracts the sport’s top 3-year-old horses.
But “the Spa” has faced stiff competition in recent years from Monmouth’s $1 million Haskell Invitational, run on Aug. 2.
The New Jersey track has lured some of the biggest names for the Haskell by offering appearance fees to owners and trainers, a practice the New York Racing Association — operator of the Aqueduct, Belmont and Saratoga tracks — doesn’t follow.
Zayat has pledged to keep the horse in training, at least through the end of the year, and said he would leave selection of the next race to Baffert, a Hall of Famer whose horses have won seven of the Haskell’s last 14 runnings.
Baffert’s luck in the Travers hasn’t been as good. He won the 2001 Travers with Point Given, but the horse came out of the race with an injury that ended his career. In four other Travers, his horses finished no better than third.
Winning a Triple Crown doesn’t guarantee a win at Saratoga, long known as the “Graveyard of Favorites.”
In the 1930 running of the Travers, 100-to-1 shot Jim Dandy defeated Triple Crown winner Gallant Fox by eight lengths. In the ‘78 Travers, Affirmed narrowly defeated Alydar, second-place finisher in all three Triple Crown. But Affirmed was disqualified and placed second for interference.
Of the 11 previous Triple Crown champions, only 1941 winner Whirlaway has won the Travers.
The 1973 Triple Crown champion, Secretariat, was beaten by a horse named Onion in the Whitney Stakes, another prestigious Saratoga race.
The Jim Dandy and Travers weekends pack Saratoga every year anyway, and adding American Pharoah to either would have a major spillover effect that would benefit the entire area in terms of hotel bookings and other tourism spending, Shimkus said.
“This hasn’t happened in 37 years,” he said. “For people to be able to see that history, it would be a week-long impact, not just one day.”
Wherever he winds up racing this summer, American Pharoah could be making the next-to-last start of his career. He’s expected to make his final run in the $5 million Breeders’ Cup Classic at Kentucky’s Keeneland on Oct. 31 before being put out to stud in the Bluegrass State.
NYRA spokesman John Durso Jr. said “it’s still too early” to talk about what can be done to convince American Pharoah’s handlers to bring the horse to Saratoga this summer.
If racing fans had their way, it already would be a done deal.
“This should be the next step for him,” said Jim Stanley, owner of the Tin & Lint bar in downtown Saratoga Springs. “It would probably be the biggest thing we’ve ever seen. The week leading up to the race, people would be all over the town.”
If the messages Shimkus received immediately after American Pharoah’s Triple Crown-clinching victory in last Saturday’s Belmont are any indication, New York racing needs to go all out to make it happen.
“It wasn’t five minutes after the race and I had 10 text messages from people saying we need to do everything we can to get this horse to come here,” he said.
Posted by save the victoria pool society at 10:21 PM No comments:

Save the Victoria Pool Society is Back!! 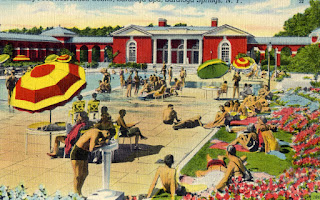 Welcome to the Victoria Pool opening of 2015 at last!  It was a very long and unusually frosty winter but it is over and summertime will soon be here.
Posted by save the victoria pool society at 9:50 PM No comments:

Built in the 1930s, the stately pool in Saratoga Springs will be open 10 a.m. to 6 p.m. weekends through June 21, according to the state Office of Parks, Recreation and Historic Preservation. Beginning June 27, the pool will be open the same hours daily through Sept. 6. Fees are the same as last year – $8 for age 12 and over, $4 for ages 5 to 11 and free for those under five.
The Peerless Pool at the park opens June 27. Hours are 10 a.m. to 6 p.m. daily. Costs are $2 for those 12 and older, $1 for ages 5 to 11 and free for those under five.
Also, park officials and community partners will unveil new trail improvements at the park at 10 a.m. Thursday. Information: 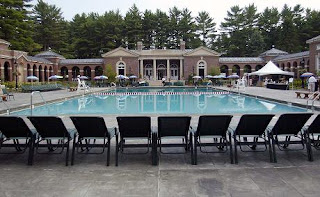 Labor Day 2014 at Victoria Pool. A toast to all our old and new friends who made this another memorable season. 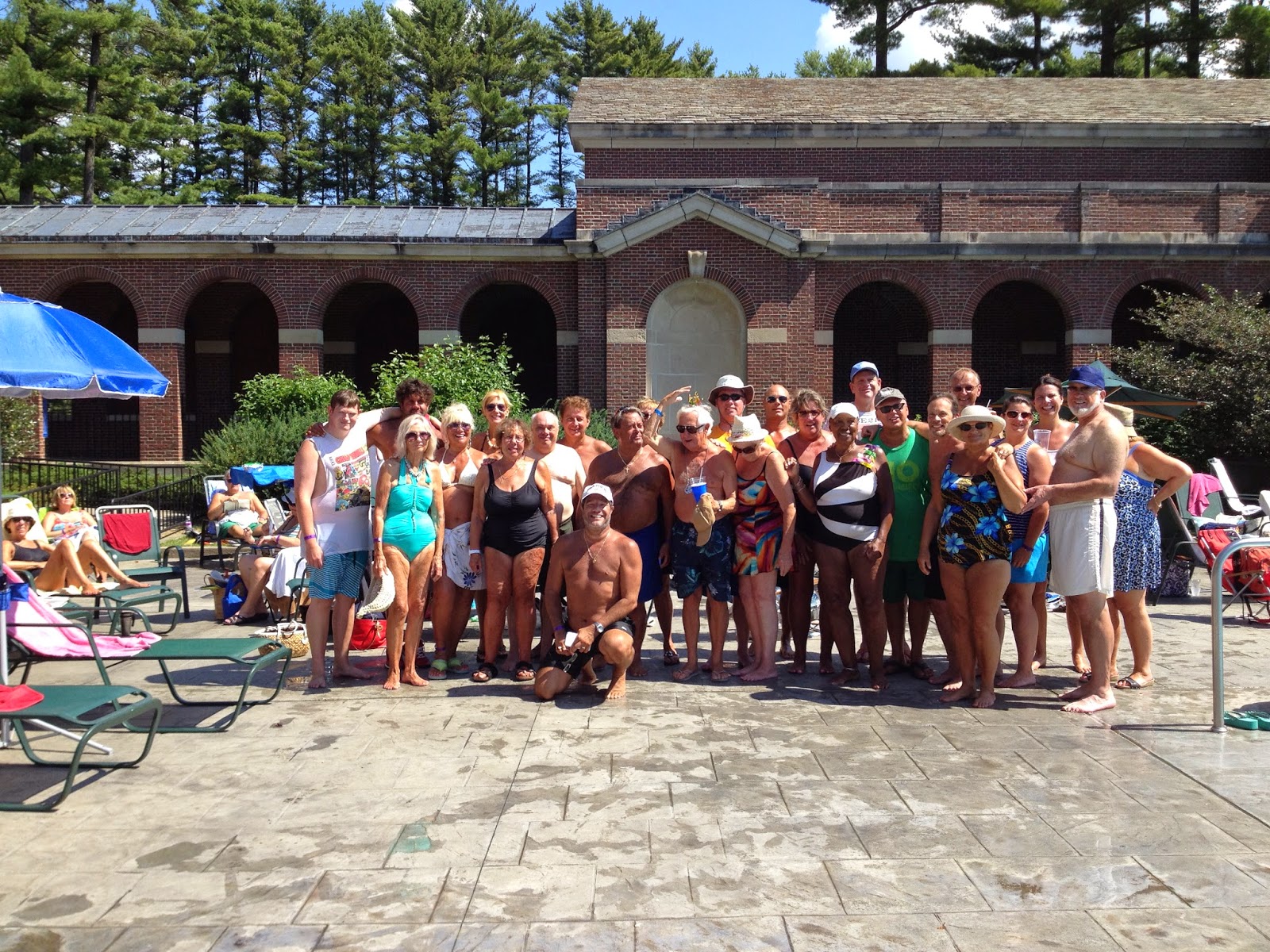 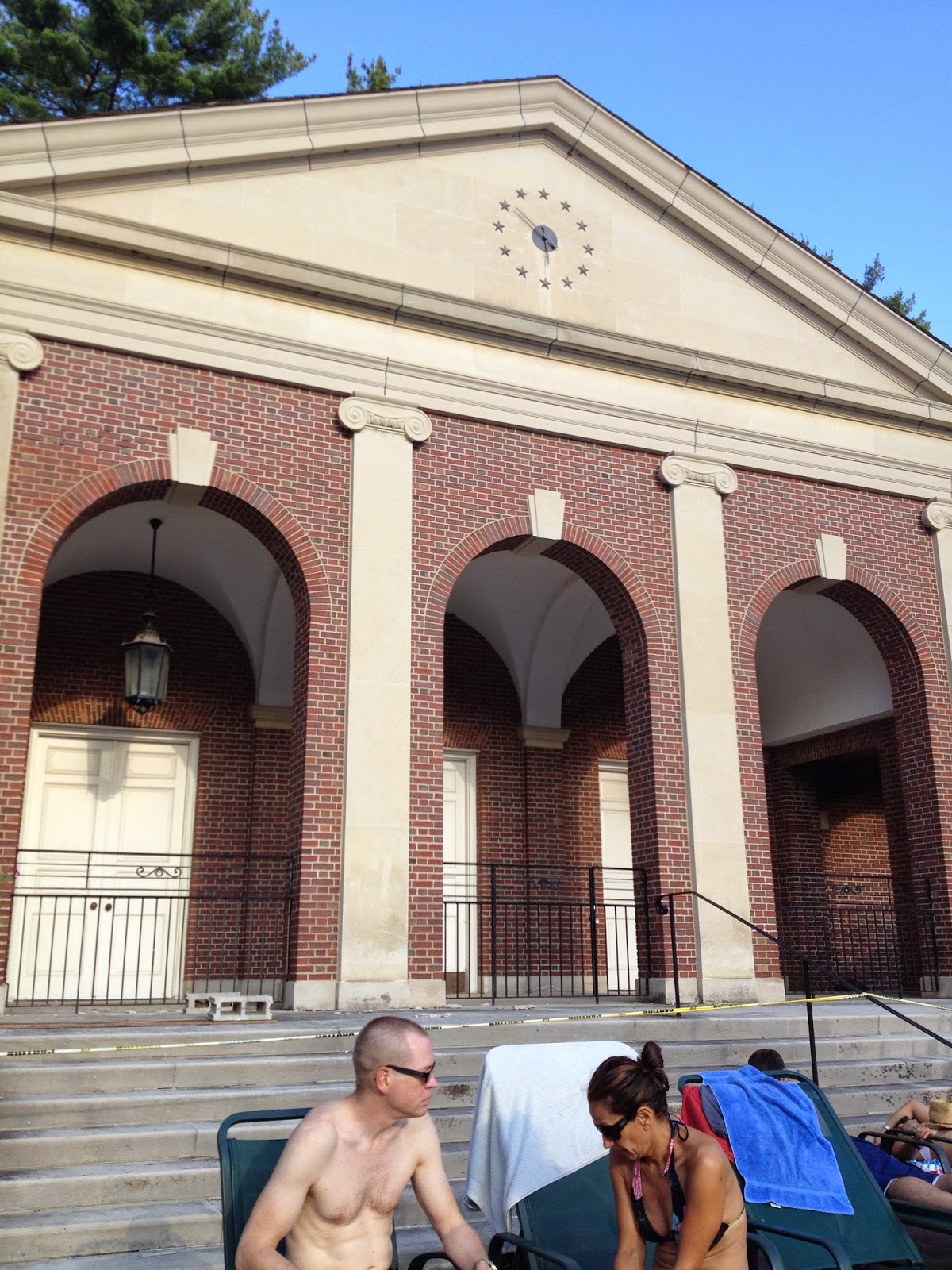 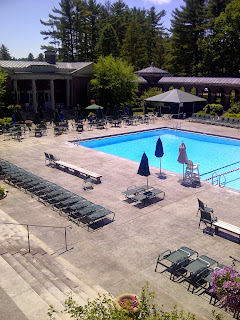 Posted by save the victoria pool society at 12:44 PM No comments:

Two senators have secured $500,000 for repairs and renovations to the historic Victoria Pool at Saratoga Spa State Park ahead of its full-time opening on Saturday. State senators Kathy Marchione (R-Halfmoon) and Betty Little (R-Queensbury) will join Louise Goldstein and Andrew Jennings – the co-founders of Save the Victoria Pool Society – at 10:30 a.m. Thursday on Roosevelt Drive in the park to announce the half-million dollars in funding from this year’s New York State budget. The money will be used to make improvements to the Victoria Pool and promote the Victoria Pool Society’s 2014 volunteer drive, Marchione said. “We were shocked when we got the call,” said Goldstein of Saratoga Springs, a long time booster of the stately pool built in 1934. “We’re very grateful to Senator Marchione.” The persistent Save the Victoria Pool Society contacted and met with Marchione to explain the needs at the pool, Goldstein said. The group’s efforts in 2003 moved state leaders to provide $1.5 million in funding to fix the pool and keep it open. “Since we got the original money, there really hasn’t been a lot done,” Goldstein said. She said the pool’s once elegant lobby was dirty and empty of furniture, the site’s iron railings were rusting and lots of other work was needed. Constructed in 1934 during the Great Depression, Victoria Pool was the first heated pool in the United States. “This resource needs to be preserved and protected so future generations can experience and enjoy the full beauty of Victoria Pool,” said Marchione, who faces a challenge from former interim Troy schools superintendent Brian Howard, a Democrat from Troy, in November.
Posted by save the victoria pool society at 3:58 PM No comments:

We are still leaping for joy that New York City Ballet will be at SPAC for two weeks in 2015 and will continue to work tirelessly on behalf of the greatest ballet company in the world. 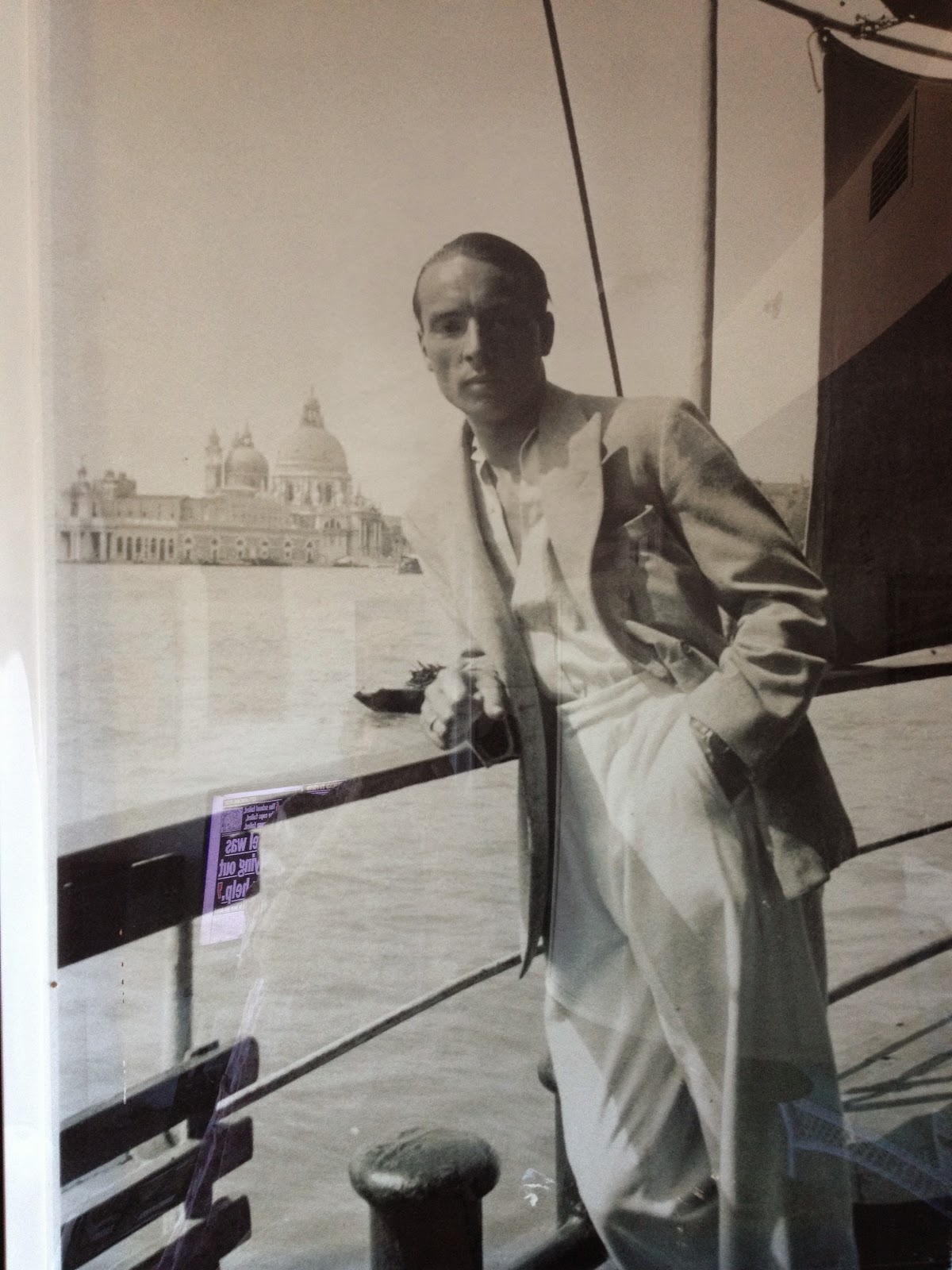 Posted by save the victoria pool society at 6:06 AM No comments:

SPAC has announced our cherished New York City Ballet will have a two week season in 2015. 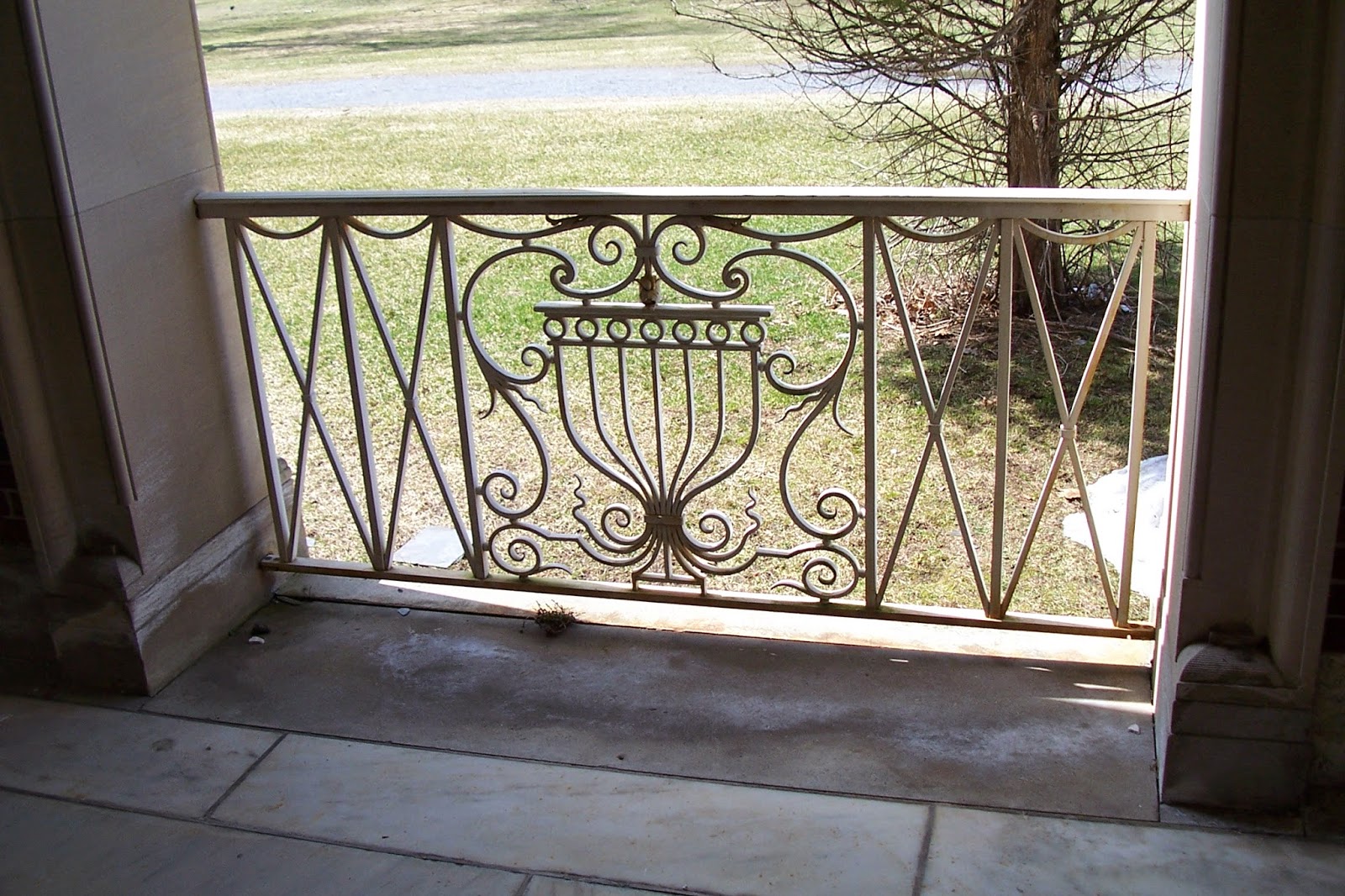 Posted by save the victoria pool society at 4:01 PM No comments:

Victoria Pool to open Saturday, 6/7/14. let the moths out of your bathing suits, folks.

SARATOGA SPRINGS — Fans of the Victoria Pool, get ready to make a splash.
State Park officials announced they will open the pool on weekends, starting Saturday. The pool will be open Saturdays and Sundays throughout the month, then daily starting June 30.
The early start will mark the second consecutive year the state Office of Parks, Recreation and has opened the pool the first weekend in June. Last year, the state opened the popular park destination June 1.
Word of the opening was sweet music to Louise Goldstein’s ears. The co-founder of Save the Victoria Pool Society eagerly awaits the opening each year and has tirelessly lobbied park officials to open the landmark earlier than mid- to late June.
Goldstein and her friends make a tradition of catching the first and last day at the pool, plus many others in between. On Saturday, they plan to be there two hours before the pool’s 10 a.m. opening to secure its most precious resources: the forest green lounges and umbrellas.
“We’ll be lining up at 8 o’clock for those white doors to open,” she said Thursday, “then it’ll be a mad dash for the umbrellas and lounges.”
The park’s other pool, the Peerless Pool, will remain closed until June 28. Unlike the predominantly adult crowd that frequents the Victoria Pool, the zero-depth-entry Peerless Pool is typically used by children.
Constructed in 1934, the Victoria Pool was the first heated pool in the country. It is no longer heated but retains its original brick arches and walkways.
A hot spot for New York City Ballet dancers over the years, the pool fell into disrepair during the late 1990s and early 2000s. Goldstein and other fans founded the Save the Victoria Pool Society to push for funding to restore the structure. Then-state parks Commissioner Bernadette Castro committed $1.5 million to restoring the pool in 2005.
The massive overhaul included replacing the pool’s original , enhancing its landscaping, installing light fixtures and replacing the pool deck.
The Victoria Pool will receive another $500,000 in funding this year as part of $9.5 million in park improvements announced by Gov. Andrew Cuomo in April. Plans are for various aesthetic improvements, pool deck repairs, and improvements to Catherine’s Restaurant, a privately operated business that serves pool-goers and golfers on the adjacent course.
Goldstein still hopes the state will consider opening the Victoria Pool on Memorial Day, when other parks around the region mark the start of the season. But for now, she’ll revel in the thought she and other fans will be basking poolside this weekend.
“Whatever is the magic of the pool, mostly it’s the people and people seeing each other after a long hard winter,” she said. 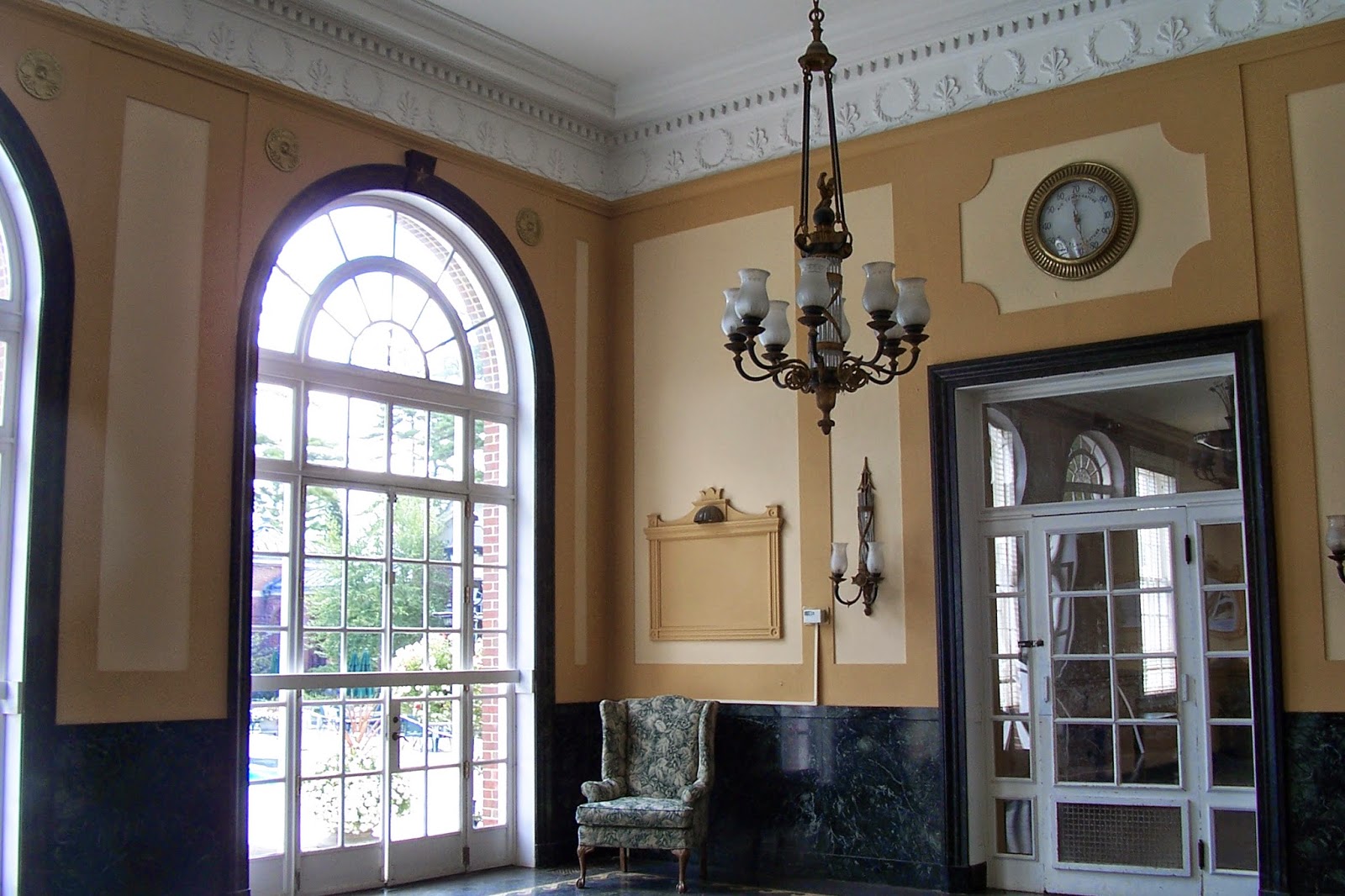 Posted by save the victoria pool society at 1:02 PM No comments: 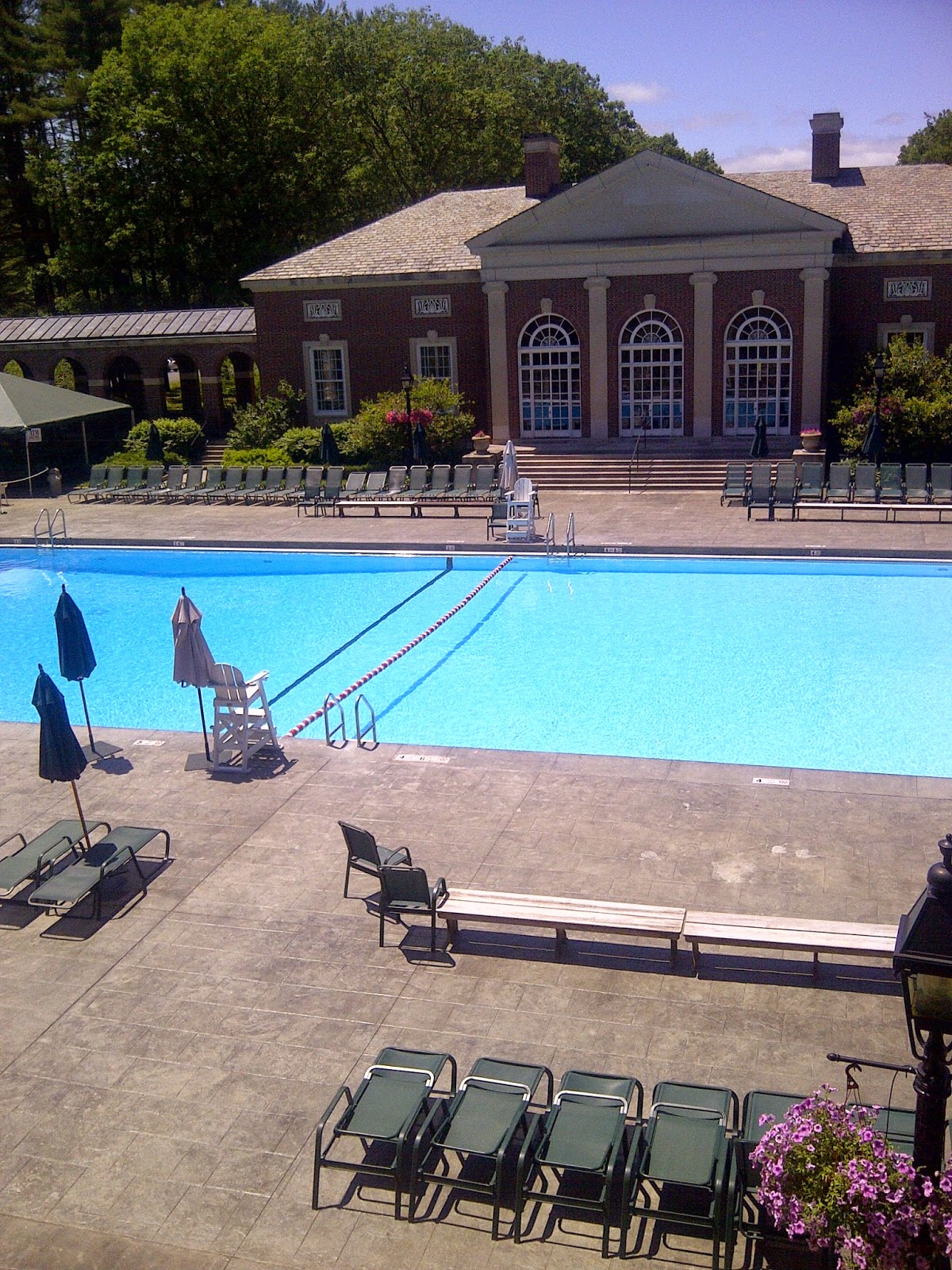 Our beloved Victoria Pool is about to begin the 2014 season.

Posted by save the victoria pool society at 12:04 PM No comments: